In a final more tense than the women’s fencing individual sabre face off for Gold between Korea’s Kim Ji Yeon and Russia’s Sophia Velikaia in this year’s Olympiad, Flying Dog Brewery emerged victorious over BrewDog in the UK International Arms Race. 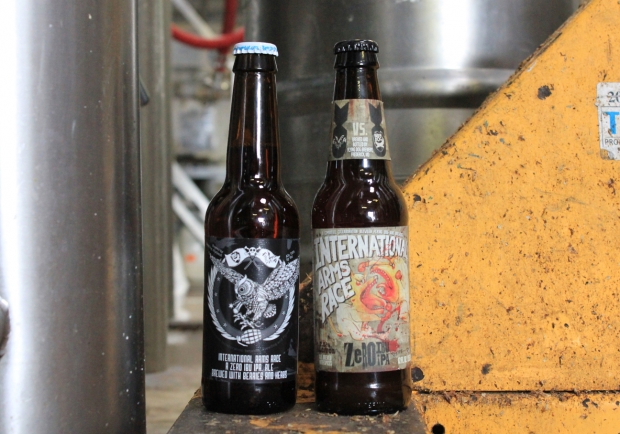 International Arms Race – a Zero IBU IPA – was put to the test on a five-day tour of BrewDog bars.

Also put to the test? Fying Dog's Brewmaster Matt Brophy and VP of Marketing Ben Savage’s livers, ability to cope with men in skirts, inability to use their personal hairdryers, and forced adaptability to the fact that everything is on the wrong side.

In this epic combative collaboration, hops were banned from the battlefield. Instead varying amounts of spearmint, bay leaves, rosemary, juniper berries, and elderflower were used to impart bitterness.

At each event, customers were encouraged to purchase a flight of both Zero IBU IPAs and blindly vote on their favorite. Savage also distributed Flying Dog-branded sunglasses to the crowd, a generous and fitting gift.

Then, at the end of each night, votes for each version of the beer were tallied.

BrewDog came out of the gate strong: winning the ‘Hulk Hands’ in Aberdeen, & then Glasgow the following night. However, Savage & Brophy had a few tricks up their sleeve and took BrewDog from behind: winning the coveted “Quack the Ripper” in Newcastle, Arms Race ‘Championship Belt’ in Manchester, and some ‘flag looking thing’ at final showdown in Camden.

It seemed as though the Flying Dog boys were not phased by the tactical strategies of BrewDog : mis-informative sat nav, driving on the correct side of the road, an engine that cut out every time you stop (in an attempt to slow them down), as well as overly complicated showerheads & light switches.

Oh, and because we do quite like them, we decided to brew an actual collaboration when the Flying Dog guys were over too.

We brewed a Rye IPA - loaded with American hops. Some of which came from Matt Brophy's garden. More details on this beer will be released in a few weeks time.

Chris H 03.09.2012 @ 11:14pm
James, I have a bottle of the BrewDog IRA in hand. On one side it says "made with barley, hops, yeast, water," however on the other side it says "'Zero IUB IPA' is an IPA beer using no hops. The hops are replaced with berries, herbs, and roots" Labling fail? I loved the BrewDog version, sadly my wife loved the Flying Dog version...
concerned 03.09.2012 @ 9:16pm
JamesWhere about on the label is the full list of ingredients on the label text on the bottle ?
PeterG 03.09.2012 @ 5:37pm
I really enjoyed the concept, and thanks for putting it on. Hope you do more in future. Unfortunately I didn't like either beer, both pretty gross, but the no hop idea was worth a shot.
Adrian M 03.09.2012 @ 3:02pm
Epic events, cool people and killer beers.thanks for bringing all the cool flying dog stuff
neepheed 03.09.2012 @ 2:07pm
All the wee doggies leaping to the defense of there master.....Ahhhhhhhhhh
9double9 03.09.2012 @ 1:24pm
enjoyed both beers in glasgow, i would certainly buy both again m/ m/ James, quick question, whats the chances of "hello, my name is ingrid" being brewed soon as i miss that cheeky wee beer : )
Mad Max 03.09.2012 @ 1:18pm
the format of the event in Camden was just so much find. Blind tasting, customers voting, brewers going head to head on the bar top.just a brilliant night - thanks to all who helped put it together
Amy K 03.09.2012 @ 1:17pm
The event at Glasgow was amazing - wicked music and sooo cool to meet the Flying Dog guys. Loved Pearl Necklace.
Craft Beer Junkie 03.09.2012 @ 1:16pm
Loved them both. Especially the brewdog one! It is also the favourite beer of my wife. Just bought 24 bottles online - making sure to stock up before it is all gone!
James, BrewDog 03.09.2012 @ 1:15pm
The full list of ingredients was in the label text on the bottle.
Wee Jimmy 03.09.2012 @ 1:13pm
A full list of ingredients in beer is not a legal requirement in the UK. It should be, but that's a different story. I thought they were both decent, without such a vital ingredient they were both very interesting. @concerned - Just to be safe I suggest you never eat or drink again.
Breakbeat 03.09.2012 @ 12:16pm
Which one was which? I voted for no. 2 in Manc
concerned 03.09.2012 @ 11:57am
You'd have though an accurate list of ingredients a legal requirement.... a little concerned.
hellboy 03.09.2012 @ 11:49am
James You did not bother to put a list of ingredients on your label, unless you only used water, yeast and barley. I wonder how many of your customers will buy these again, time will tell.Brewdog bars too far away and expensive for me im afraid.
MarcRitchie 03.09.2012 @ 11:35am
Thought the brewdog one was excellent, very tasty. Liked the flying dog but not nearly as good
James, BrewDog 03.09.2012 @ 11:34am
@hellboy - we did not cheat and put hops in it - we just forgot to remove hops from our standard ingredient list on the label.Sorry if the beers were not for you. We (and load of our customers) loved them and loved the whole process behind them. If you visit one of our bars, our team will be happy to give you some tasters, talk about our beers to you and find something more suited to your tastes.
hellboy 03.09.2012 @ 11:26am
What was the overall opinion of these beers, I though they were awful. Would never buy again.and brewdog cheated, they put hops in theirs.
Brian S 03.09.2012 @ 10:56am
I don't know how flying dog won that as their beer was mince prepared to the Brewdog one. Backhanders me thinks.