At BrewDog we appreciate your inability to know your limits - especially when it comes to alcohol – which is why we created Nanny State.

Nanny State is back and this time it is better than ever. Originally brewed as a backlash against the onslaught of mass media hysteria, consensual hallucination and the nailing of BrewDog to the mast which surrounded the launch of our 18.2% Tokyo*. Nanny State was our response; a liquid protest if you will. The beer was designed to make a statement and provide a paranoid hop overdose for a politically correct generation.

Brewing a full flavour craft beer at 0.5% is tough. After some playing about, tweaking, clever science and a few pilot batches we are delighted with what we have managed to create.

The beer itself has 45 IBUS and is brewed with centennial, amarillo, columbus, cascade and simcoe hops and intensively dry-hopped with centennial and amarillo. The backbone is provided by a patch-work of 8 different types of speciality malts which combine to give the beer as much body as possible despite it's modest alcohol content.

You can buy some and make your own little protest against the bueorocracy and regulation epidemic that is apparently all that stands between us and the slow and gradual downfall of Western civilisation here.

If you live in Sweden or Norway you can also pick up Nanny State in Systembolaget or Vinmonoplet.

Here are Martin’s notes on the beer:

Big fruity up front and in your face aroma with a medley of ripe citrus, orange, sherbet lemon and lychee. Herbal and piny edges add a touch of balance. On the pallet the 100% of speciality malts work hard to balance out the barrage of Humulus lupulus we throw at this beer.  Amber and crystal malts add some biscuit sweetness which is quickly balanced and overcome with more fruity hop and resinous flavours and then these cleanse the palate and transcend into a long, refreshing and quinine bitter finish. 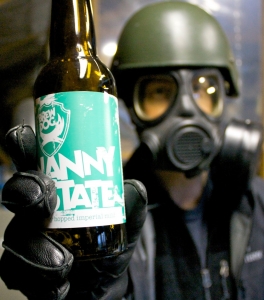 Please note: BrewDog recommends that you only drink this beer whilst wearing the necessary personal protective equipment and in a premises that has passed a full health and safety risk assessment for optimum enjoyment.

We also have some epic, slightly more alcoholic beers you can get your paws on here (but be careful)

STU 19.01.2018 @ 1:56pm
Best low alcohol beer I have tasted, bar none!
This is on the shopping list EVERY time.
As mentioned below, I love this as a refreshment break when on a hike (have plenty of water too!!)
Goodbye hangovers - never found a beer like this before that makes you happy enough to drink it at an all-nighter.
You can use it as your "every second beer" along with your full ABV beer to keep you motoring through the night!
Well done Brew Dog :-)))
Abbysteam 06.03.2013 @ 11:14pm
Can anyone tell me how many calories there are in a bottle of this?
donhay 06.03.2013 @ 12:31pm
I know it's available online, but can I buy this at any retail outlets in West of Scotland?
Bingo Little 04.03.2013 @ 5:49pm
When are you going to open a pub in San Francisco? I haven't drunk beer since the SF Brewing Company died (that location is now a whore tavern for tourists and poseurs, btw).Really.
Andre Nordin 03.03.2013 @ 4:29pm
Well i have been drinking nanny state here in Sweden for a year i was so afraid you are going to quit, but i love it.A big wish whould be a 5.5% nanny state aswell as a compliment to the "non alcoholic"
stinsley 03.03.2013 @ 1:55pm
Marvellous. 24 bottles should do it.
TheBBG 03.03.2013 @ 12:31pm
I am very pleased that you are still making this.
Fritz 03.03.2013 @ 12:07pm
I heartily support this fine brew. Annually (since being unable at last minute to make 2011 AGM due to snow) we have packed good auld Nanny in our backpack for a very long demanding snowy circuit walk. I strongly endorse this product as suitable reward for reaching the high mid-point refreshment break. I haven't tried the walk with one of my more favoured stronger products, but feel I can confidently say the return leg would be more swagger n stagger following a TNP. Thank goodness for the team thinking of everything. All that and it tatses better than any low ABV brew you've ever tasted.God Bless the good crew at Brewdog, hurrah! ;-)