Ah, the 17th of March, the day the world gathers together, joins hands and celebrates the mother of all special occasions – National Muay Thai day. And Kurt Russell's birthday. Or even the day the rubber band was patented. It is – of course - also St Patrick's Day.

While we're not adverse to donning national colours, celebrating traditions of all persuasions and allowing shamrocks to spew from every orifice, there is something about St Paddy's Day that grinds our gears. Perhaps it's the exploitation of a religious holiday as a cheap marketing ploy by pubs and clubs to shift more booze. Or perhaps it's even the excuse it gives people to get absolutely hammered and terrorise both their livers and their dignity, all in the name of a Patron Saint they probably know little about.

Either way, this year we've decided to put together a short survival guide for those looking to spare themselves 24 hours of over-commercialisation and binge drinking whilst the population of mainland Britain becomes temporarily Irish and the streets run black with spilt pints of Guinness.

Talking about the black stuff, a staggering 13 million pints of Guinness will be consumed around the world on St Patrick's Day. We're big believers in bucking the trend and backing the underdog which is why there's never been a better time to give Guinness the boot and opt for a craft stout instead. We're proud to have created three rock'n'roll, palette-grabbing stouts – including Rip Tide, Paradox and Tokyo – as well as stocking the likes of Stone Russian Imperial Stout and Mikkeller Amayer Bryghus Hr. Frederiksen in our online shop. We're sure one less pint of Guinness won't go amiss.

Everyone likes a bit of casual racism, even if it means dressing up as a leprechaun whilst bellowing 'Top of the morning to you' through a traffic cone at 4am. While the rest of the population invests in plastic pots of gold and stick-on ginger beards, we feel it's important to add a bit of diversity to the mix and get equally as passionate about stereotyping other nationalities. Whether it means swinging a string of garlic around your neck or donning a pair of lederhosen, forgo the obvious and employ your own equality act this St Patrick's day.

Or, if all else fails, just go into solitary confinement

For those of us who simply can't abide the thought of another St Patrick's Day, have nothing better to do or perhaps endured an unfortunate incident with a leprechaun they'd rather forget, let BrewDog Aberdeen and Edinburgh (now unofficially open) be your clover-free haven. We don't need to run gimmicky promotions off the back of religious holidays to encourage our patrons to enjoy quality craft beer which means our bars are a St Patrick's Day free-zone. Come and say hi! 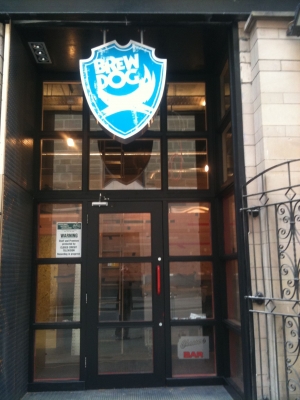