Tuesday the 25th of January is Burns Night and maverick Scottish brewery BrewDog is hosting an extraordinary event to celebrate in South London. The White Horse on Parsons Green will be holding a beer and food matching event, including some of the world’s most exotic and artisanal ales, hosted by BrewDog co-founder James Watt

The event will start at 7:30pm and be held in the upstairs bar and dining area of The White Horse. It will include a 5 course Scottish inspired set menu with relevant BrewDog beers, including beers previously never sold in the UK, matched to each inventive course. BrewDog food and beer pairing evenings have never before been hosted in London, despite a cult following in Scotland, making this Burns Night an iconic event for South London’s beer fanatics and gastronomes.

In addition to the inventive menu and exclusive drinks on offer, there will be traditional Burns Night entertainment including Scottish folk music and a bag piper. 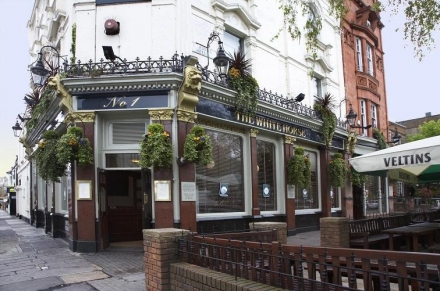 The Brewdog beers available on cask will include a new 5.4% version of BrewDog’s flagship Punk IPA, Alice Porter, the international award-winning Hardcore IPA, the whiskey-cask aged Paradox and the rare gem Rip Tide. An exclusive sample of the brewer’s special edition AB:05, a Scotch ale, will be on keg, alongside 77 Lager, Punk IPA, Citra and the exotically-named Hello, My Name is Ingrid, which has never been sold in the UK before. An IPA brewed specifically for the discerning Swedish market, Hello, My Name is Ingrid is brewed using cloudberry and will only be available in the UK on Burns Night at this venue.

The White Horse will also have a fine selection of Scotch whisky available from the highlands to the lowlands, from the isles to speyside.

The food created to match with this powerful array of beers includes Scottish favourites, such as Cullen Skink, Scottish Salmon and Raspberry Cranachan, as well as an interesting twist on the Scottish icon, Haggis spring rolls. To conclude the festivities, there will be Scottish cheese and a shot of Tactical Nuclear Penguin Ice Cream Float (32% ABV).

James Watt, co-founder of BrewDog commented:
“The plan is to add BrewDog’s customary bite to Burns Night; building on its foundations of gastronomy and debauchery to provide a spark of Scottish punk verve to an otherwise dull midwinter night. Nobody will ever have experienced a Burns Night like this before.”

This will be a night to celebrate Scottish influence on the world of food and beer, with Scotland’s own resident expert, Brewdog. Come join us and create a new Burns Night experience, as well as receive a Scottish beer & food matching education.

Ticket cost is £45 per person, which includes a 5 course menu with relevant beers matched. To make a booking please email [email protected] or call the number below. There is a £10 per person deposit.
The White Horse is located on Parsons Green, within a 2 minute walk from the District line’s Parsons Green station. We are also a short walk from the 22 bus, and Fulham Broadway.

James with a glass of Hello, my name is Ingrid and some very red eyes.