You can invest in BrewDog at www.brewdog.com/equityforpunks

For years we’ve been suffering that maddening delusion that a man can find something real in this world. Where’s it at these days? Where indeed. Fake Art, fake brands, fake breasts, and fake lager. There is nothing so mind numbing as ordering a drink and coming face to face with the certainty that it is a complete and utter fraud. A charlatan, faux, not real. The ugly fallout from the Lager Dream. Time to wake up and smell the hops, to rip up the rule book and stick a jackhammer in convention. We don’t do second rate, almost or maybe. It’s the real deal or nothing. Via con dios fake lagers.

Fake Lager is our attempt to reclaim one of the world’s great beer styles – the Bohemian Pilsner.

This bastardisation of a classic style now accounts for a staggering majority of total beer sales globally. 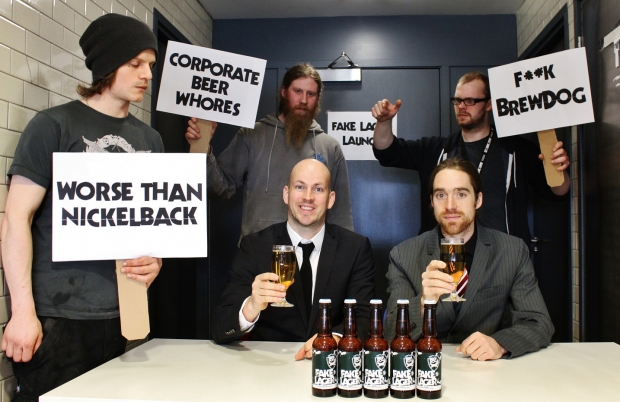 This beer was initially launched as an April Fool's joke. Hence the above photo.

All of our beer is available online here.

Hello, my name is Mette Marit

We are also excited to announce the latest in the series inspired by the cult classic Hello My Name Is Ingrid, Hello My Name is Mette Marit is a Norwegian inspired double IPA and this beer is definitely not as innocent as she first appears.

A seductive body of rich malts and a buxom amount of Citra, Nelson Sauvin and Bramling Cross hops have been added with mountains of fresh Norwegian lingonberries. This is one red berry hop explosion, best enjoyed with a faux air of aristocratic nonchalance.

We are also sending this beer to Norway. In Norway it will be known as 'Hello, my name is Censored'. You can make up your own mind as to why.

While you're shopping about, be sure to check out the pretty incredible selection of guest beers we have online at the moment from the likes of Mikkeller, Stone, To Øl , Oskar Blues & more! You can see them all here.