We also made a special beer for the games, you can get your paws on some here www.brewdog.com/product/never-mind-the-anabolics

Ok, so we admit it – we may have turned our noses up at all the Olympic hype before the start of the Games but screw it, we’ve got pretty engrossed in all this torch touting, javelin chucking business.

If it weren’t for all this brewing malarkey, Martin would be donning his short shorts and headband full time and running off to…well just running, basically.

In the meantime, we’ve had to sate our lust for London 2012 by creating Team BD. They may look like a set of pint sized contenders but we promise you they are every measure the champion.

So who made the squad?

While we may need to brush up on our triple whatsits and backwards axle thingymies, Sunk Punk is an athlete who can dive. Really dive. Hailing from the ocean floor just off the coast of Aberdeen, we’re confident Sunk Punk would be deserving of the gold, silver and the bronze when it comes to staying under water for the longest length of time. Sunk Punk also learned to speak fluent ‘whale’ whilst fermenting on the seabed. Surely that’s worth a medal in its own right?

Representing Team BD in the marathon: The End of History

There are some things in life that can take time to do: Like teaching your dog to sneeze on command (one of our BrewDog dogs can actually do this, we’ll let you guess who) or convincing your Nan to join Facebook and waiting for hilarity to ensue. Marathons also take time which is why you need a competitor that can go the distance. The End of History does just that, blitz it in the first few miles and you’ll quickly lose your cool, pace yourself and you’ll become a legend. Plus the whole squirrel thing kind of makes it count as a fun run costume at the same time. Win win.

Representing Team BD in the dressage: Sink the Bismarck! 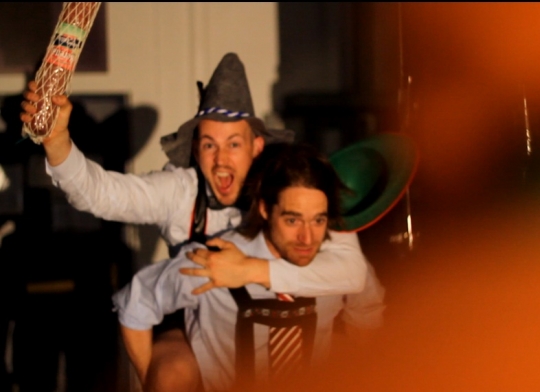 Apparently those pesky Germans are really good at that horsey dancey thing. Don’t act like you don’t know what we’re talking about – it’s dressage. Anyway, they’ve won gold practically every year which is why we want to shake things up a little and unleash our own dressage master – Sink the Bismarck! What’s more, we don’t get involved with horses. Instead, Team BD do dressage on donkeys. Dancing donkeys; just think about it for a second.

Do you know what the coolest sport is at the Olympics? It’s race walking. Practically the only sport in the world that prompts a pure ‘WTF?’ response any time it’s on. Lots of people think those new-fangled ‘urban’ sports are cool, like BMXing or granny slinging. Forget it. To be a speed walker you have to be so beyond giving a fuck that you are in a whole new universe of cool – a la Dead Pony Club.

Bridled aggression, flare, passion and strength, just some of the qualities possessed by Olympic boxers. Luckily for us, we’ve also got a competitor who embodies these qualities – Punk IPA. Ready for your taste buds to be well and truly assaulted, then pummeled again? You’ll be up against those ropes before you know what’s hit you but don’t be surprised when you keep coming back for another round.

Think you know which beers should be in Team BD? Let us know!

We also made a special beer for the games, you can get your paws on some here www.brewdog.com/product/never-mind-the-anabolics