It’s that time again. Time to let all you beer tourists line up with your notebooks and box cameras and take a peek inside our brewhouse to see what’s boiling in our kettles, fermenting away in our tanks, or rattling down our bottling line. Prepare yourself. These are our newest beers ever.

This series of 4 beers gives the limelight to four totally different yeast strains: Belgian Trappist, Pilsen Lager, American Ale and Bavarian Weizen. All 4 beers have been brewed to the same ABV using a blend of Centennial and Amarillo hops and a backbone of Pale Ale, Munich and Cara Malts.

The unsung heroes, the foot soldiers of the revolution. We owe a huge debt to the billions of tiny yeast cells that work tirelessly to ferment sugars into alcohol and CO2. But yeast isn’t just here for the grunt work. Yeast has the power to change the flavour, aroma and complexion of your beer in an instant. This series is designed to showcase the impact different yeasts have on the same base beer.

Unleash the Yeast is due to be released in late October.

We love Oskar Blues. We make no apologies for coming on strong about it. So if you’re yet to discover what this brewery offers, go out and get your hands on a can of Dale’s Pale Ale or the incredible Ten Fidy 10.5% imperial stout. In August, we had Dave, Stephen and Chad from Oskar Blues visit us and while we had the boys over here we collaborated on a big, uninhibited beer. This is Shipwrecker Circus, a 10.5% American style barley wine, embodying all the fun and strange madness of the big top.

The latest installment in our long-running “Hello My Name is…” series. Brewed in collaboration with Jeppe from Evil Twin Brewing, this beer has been fittingly named after Jeppe’s mum … because she’s a Danish woman and that’s kind of how this series works. Single hopped with Mosaic and loaded with well over 100kg of blueberries, this big fruity hop bomb is everything you want in a woman. Or a man. Come say ‘Hi’ to Sonja soon. 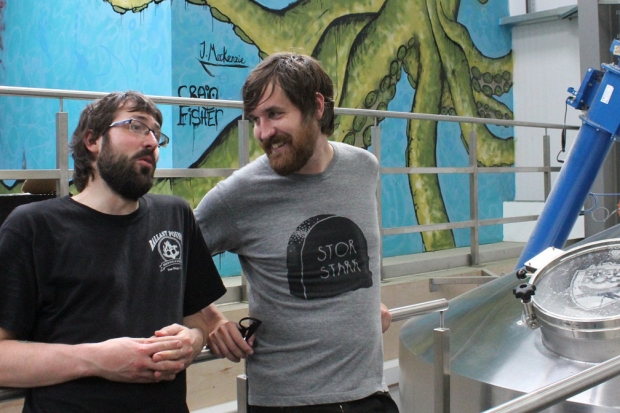 Join us as we revisit the Old World. Back to the days of rolling ships and Kings and Queens and no TV. Both of these beers have beautifully hand drawn labels by Johanna Basford which intricately depict the story and heritage of each beer style.

These two beers are our way of paying homage to the great, genre-defining beers of yester-year. Old World Imperial Stout takes us back to the origins of one of our favourite styles. Originally created to honour the Russian royal family, imperial stout was brewed to an ABV of 9.5% to avoid freezing during its journey across the Baltic Sea to snowy Moscow. This beer is a fitting tribute with which to toast your own empire.

Old World India Pale Ale is an IPA from a bygone era. An era of towering sailing ships, burgeoning empires and world shaping beers. This beer has been handcrafted from British malts and English hops to recreate the epic beers that were shipped on monumental ocean voyages from England to India. A true forefather of the craft beer revolution.

That’s right. Not one beer or a few beers. We’re talking twelve beers, each one entirely new and never-before-seen-or-tasted. 11 of these beers have been brewed in collaboration between our bars and their local breweries. The breweries provided the equipment and the know-how; and our awesome bar teams brought a tonne of ideas, mad enthusiasm and manual labour! The twelfth beer is a mega-collaboration between us and all 11 breweries involved. Featuring 11 different hop varieties, this beer is a real combination of characters and visions.

All 12 beers will be unveiled on October 19th at your local BrewDog bar, with the brewers on hand to give you the lowdown.

[email protected] 11.10.2013 @ 5:11pm
Any chance sonja and shipwrecked will be out at the same time? Looks like the yeast series and the old world beers will be out later. Just hoping to save on delivery costs by ordering together! Thanks.
Boaby 10.10.2013 @ 7:31pm
Will the IPA have brett in it? And has it been aged a year?Looking forward to trying all these!
oyvindgg 10.10.2013 @ 6:38pm
The Russian imperial family and the Russian empire had St. Petersburg as their capital, which of course lies by sea. It was the Bolsheviks who moved the capital to Moskva in 1918. But by then there were not much international trade nor imperial stouts, although they got rid of the imperial family and the aristocracy - hats off to them!
Data 10.10.2013 @ 5:39pm
The old world imperial stout blurb sounds awfully similar to another from a year or so ago (xmas time?), surely you can think of something else to say!Other than that, the different yeast beers sounds good, hoping it's better than the IPA is dead series...Looking forward to the big top!!
Grahamf4 10.10.2013 @ 2:57pm
Be good to see how the Old World IPA turns out. Lots of spicy hops I hope.
BrewDog Zarah 10.10.2013 @ 2:11pm
Hey Stephanos,Dead Metaphor will indeed be bottled. Watch this space ;)
Edin_Andy 10.10.2013 @ 1:58pm
looking forward to Old World Imperial Stout. I bought this last time it was brewed, but it got smashed in transit.
Stephanos 10.10.2013 @ 12:40pm
Will dead metaphor be bottled?
toninus 10.10.2013 @ 12:31pm
The Oskar Blues Collab looks yummy !But the yeast series have been already done by a famous danish brewer. Why not innovate and brew a malts series ?
BrewDogPete 10.10.2013 @ 12:06pm
AleBeHonest: this incarnation of Old World Imperial Stout is a bigger richer affair, standing at a statuesque 9.5%. Wait and see!
AleBeHonest 10.10.2013 @ 11:56am
WOW!! Pretty excited about this. Only placed an order last night. I'll have to get through them pretty quick to make some more space for these.So pleased to see the Old Russian Imperial Stout back in the lovely bottle. (Am I right in thinking it's a big bottle of RipTide?) Very intrigued by the Old Pale Ale. Yeast series too sounds like another must try.
Sam Hall 10.10.2013 @ 11:48am
Looks like my bottle collection is about to admit some new members ;)
HopZine Rob 10.10.2013 @ 11:47am
And Dead Metaphor....I see an empty wallet in my future.
Craig D 10.10.2013 @ 11:42am
I'm so excited for the yeast series. It's like an education in a glass ... or 4.