Some cool beers, that are in our tanks.

Dog A is a very special beer. This beer will be released to commemorate our 5th anniversary in April 2012. Dog A is a beer which originally appeared as AB:04 and was perhaps the sought after beer we ever brewed. The beer is only available to buy direct from BrewDog (at our AGM, our bars and our online shop) and will be offered exclusively to our shareholders first.  Dog A is a 15.1% Imperial Stout brewed with copious amounts of dark malts, pure cacao and coffee, balanced by the subtle addition of naga chilli. Perfect for ageing in your cellar or drinking fresh if you are lucky enough to get your paws on a bottle.

Here is to an awesome first 5 years of BrewDog. We look forward to the next 5. Go to the edge and keep going. This ride is not over.

The original (and kinda messy brew-sheet)

It is currently maturing in B3 with some chilli, cacao and coffee for company.

What do you get if you take our World Beer Cup Gold Medal winning Imperial India Pale Ale and replace all the American hops with New Zealand ones?

Hardcore NZ! And we just brewed a tiny batch in one of our baby tanks using Moteuka, Nelson Sauvin, Pacific Gem and Green Bullet. The beer will be keg only and is available in all BrewDog bars from today. Go get some! And hope James and Martin don't drink it all before you get there!

James tries unsuccesfully to get all the kegs of Hardcore NZ sent to his house.

Some of you may have noticed IPA is Dead Simcoe in BrewDog Bars recently. This was the pilot brew for the 2012 IPA is Dead series. For the 2012 series we reduced the amount of speciality malt (crystal malt, caramalt and amber malt) in the malt bill to enable the hop flavour to come through even more.

Brewer Jonathan and (H)Operations Manager Brian with some IPA is Dead Galaxy, currently being dry hopped in FV 16

Can you say you've ever experienced 100% pure hop awesomeness? IPA is Dead is brewed and bottled to do just that. The beer will be released on draft in all BrewDog bars on the 20th April and online on the same day. 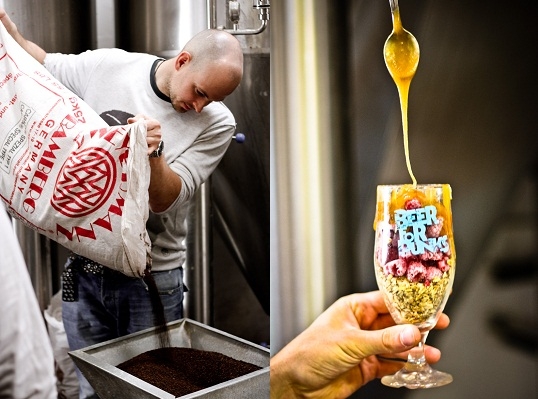 AB09 is due to be released in early April and the Cranachan Imperial Stout we brewed in September last year. Since then it has been peacefully maturing in amazing single grain whisky barrels.

Remember voting for what we should brew back in 2011? The ideas came flooding in and you eventually voted for a Cranachan Imperial Stout. And it was Wednesday with some special guests: Gareth Young (who came up with the idea) along with our Scandinavian Top Dog Darren Packman, Per from Cask Sweden along with Stene and Rille from the acclaimed Akkurat in Stockhom.

The Cranachan Imperial Stout was inspired by the famous Scottish desert, brewed with a mountain of dark malts, loads of oats, Scottish Heather Honey, local raspberries and has been aged in grain whisky casks. Whilst brewing, ingredients certainly tasted pretty spectacular. Raspberries dipped in honey, oats and cacao were a post lunch treat! The 17.1% beer is now being transferred from oak cask back into tank in preparation for bottling.

The beer will be released in early April.

This beer will be available on draft, although each BrewDog bar will only have one 20L keg of it as it is extremely limited, and in bottle from the start of April.

Here is our brewer George with a sample of the beer from FV3.

Anarchist / Alchemist
Fuck the system. Forget what you know. What has been. Bow to no one. History is bereft. Reorder. Disorder. Embrace the unknown. The groundbreaking. The challenging. The ichorous revolution is upon us.
Anarchist / Alchemist
Try until your fingers bleed and your mind is numb.Try harder. Try this. Try that. Try the other. Try what hasn’t been tried. Then try again. Keep trying. Forge the new. The molten elixir awakens.

Just a note on Libertine Porter. We have had it on keg in the bar for the last few weeks. The bottled version will be around 6 weeks away.

Many of these new limited release beers (IPA is Dead, Anarchist Alchemist and Hardcore NZ) are heavily dry hopped.  Dry hopping is the process of adding loads of hops to a beer at a low temperature after fermentation. It looks something like what is happening in the glass above, but in a tank!