Zak Avery, Pete Brown and Mark Dredge are without doubt 3 of the very finest beer writers this side of the Atlantic and rockstars of the craft brewing movement. Between them, the trio have a gaggle of International best selling books, more beer writing awards than you can shake a stick at, amazing blogs, massive  beer knowledge and an avalanche of passion to back up their credentials. And they are coming to Aberdeen this January! 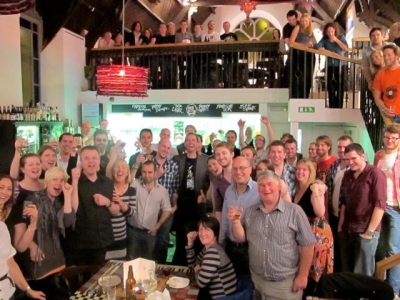 Greg Koch and attendees of the Stone Brewing Company Beer Dinner at Musa.

On Wednesday the 26th of January we will be hosting the Avery, Brown, Dredge Beer Dinner Extravaganza at Musa www.musaaberdeen.com . We will have an evening filled with great food, extremely rare beers and awesome insight into our favourite drink. Each of the 3 writers will be presenting 2 of their favourite beers which will be paired with food which they have worked with our Head Chef to create. They will be talking about their views on beer and also on the specific pairings they have put together. This will be a fascinating insight into some very rare and exquisite beers and also stunning beer and food pairings put together by guys at the absolute top of the game.

For the Musa Beer Dinner we will have 6 courses of food and 6 beers being presented.

Beers Include: Maui Coconut Porter, Alesmith IPA, Nogne 0 Dark Horizon (topped with vanilla ice cream in a shot glass as a pre-dessert shooter) My Antonia -  a collaboration between Dogfish Head and Birra del Borgo, and some other very special ones too!