Undercover Brewer: A sneak peak at some upcoming beers

Here is a sneak peak at some new and limited edition beers we are working on at BrewDog HQ. Despite our staple classics like Punk IPA and 5am Saint we love experimenting with new techniques and ideas. Here is our current crop of them.

It is Lager, but not as we know it. In late 2010 we decided to take 77 Lager and try do something pretty special with it. Because we are geeks and like numbers, we brewed a batch which was 7.7% then put it into single grain scotch whisky casks. The beer has been aged for 18 months in oak now and has been lightly filtered (to remove the charring from the barrels) and is on our Bright Beer Tank ready to be packaged.

The beer will be bottled and kegged and available at the start of May. Look out for it in our online shop and on draft in our bars.

The first prototype batch of Libertine Black Ale is now on tap in all BrewDog Bars. The 2nd is now fermenting nicely in FV 22 as the American ale yeast works it magic turning the sugars from the dark and complex malt bill into alcohol.

Libertine Black Ale is a 7% wickedly decadent black beast of a beer that has been hammered with the epic Simcoe hop. With a drinkability that defies its colour and depth of flavour, Libertine delivers a dark hop bomb combining the west coast hop awesomeness of an IPA, the dark and indulgent malt flavours of big stout with a lightness on the palate that bellies the punch that this beer packs. Bags of flavour and loads of hops. We intend to bottle some of this batch for those not lucky enough to make it to a BrewDog Bar to try it.

We decided it was time to brew a slightly lower ABV beer with our favourite American hops giving you a thirst quenching draft ale in all our bars, just in time for the Summer! The new 3.8% Pale Ale is brewed with a solid malt base, moderate bitterness and masses of late hops and dry hops, specifically Citra, Simcoe and HBC. All this makes it ideal for drinking by the pint, or even by the keg. At lunchtime.

Our new 3.8% Pale Ale is ready to be packaged, just in time for the BrewDog AGM.

This beer does not yet have a name.

We were very lucky. Our Spanish freind Gabriel from Zombier managed to help us source some epic Malaga red wine barrels. These 600L beasts previously held the sweetest and darkest Malaga wine. We got them shipped over direct from Spain imediately aftr they were emptied making them insanely fresh and very a exciting brewing prospect.

Stewart Bowman, our Head Brewer, devised an Imperial Brown Ale designed to perfectly complement the wine flavours and extract maximum depth and character from the giant barrels. We also felt the Imperial Brown Ale was ideally suited to be barrel aged and as well as the infusion of the Malaga wine character will also benefit added complexity and maturity from the time in oak.

At 600L these are by far the largest barrels we ever filled. We expect the beer to be ready in late 2012 and that it will be released as an Abstrakt beer.

The Twist: This beer will be aged in whisky casks with mind-blowingly amazing raisins soaked in Ballast Point Rum.

This beer is currently maturing well. The impact of the rum soaked raisons is divine. The beer is ageing in Scotch whisky barrels and we expect that it will be ready to rock in late Summer or early Autumn. 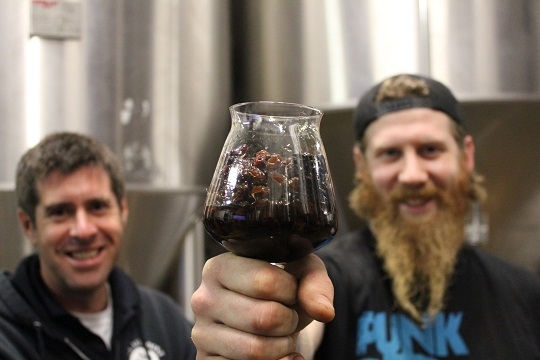 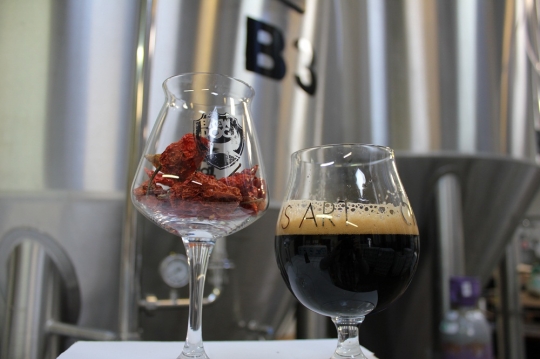 Dog A is a very special beer. This beer will be released to commemorate our 5th anniversary in April 2012. Dog A is a beer which originally appeared as AB:04 and was perhaps the sought after beer we ever brewed. The beer is only available to buy direct from BrewDog (at our AGM, our bars and our online shop) and will be offered exclusively to our shareholders first.  Dog A is a 15.1% Imperial Stout brewed with copious amounts of dark malts, pure cacao and coffee, balanced by the subtle addition of naga chilli. Perfect for ageing in your cellar or drinking fresh if you are lucky enough to get your paws on a bottle.

Here is to an awesome first 5 years of BrewDog. We look forward to the next 5. Go to the edge and keep going. This ride is not over.

In hops we trust.