You can get your paws on some Tokyo* here:

Back in June 2008 we brewed a 12% Imperial Stout called Tokyo. It was a little over a year since BrewDog had started and Martin & I were both bright eyed, busy tailed and had no idea the furore that this beer was about to cause. Looking back it is pretty amazing the controversy that ensued from brewing a 12% beer, but the UK beer scene was very different even back in 2008.

We based the beer on a 1980s computer game we had played in Japan’s capital and added some cranberries, jasmine and some cool oak chips to the brew. The media went crazy when we launched this beer:

The Portman Group banned the beer, public health bodies went into prohibition overdrive and I was even grilled by a zealous newsreader on C4 news.

Jack Law, Chairman of Alcohol Focus Scotland protested that ‘It is utterly irresponsible to bring out a beer which is so strong.’

Cue more media melt down caused by people completely ignorant as to the industry they were trying to police. More wild accusations stated that BrewDog were responsible for binge drinking which in our eyes were made as much sense as blaming a Michelin star restaurant for an obesity epidemic.

Richard Dinwoodie of the Rake leapt to our defence in the media ‘The focus on this one special beer is utterly spurious, just a case of pandering to binge drinking mania. This is just sensationalism and scaremongering of the worst kind.’ 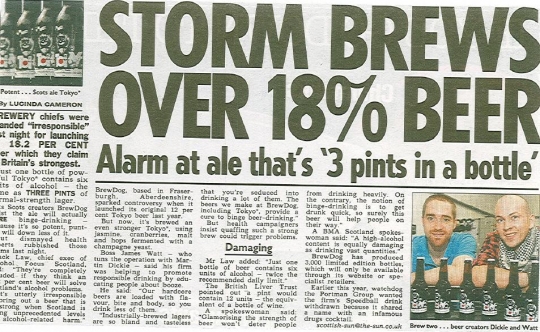 We felt a little bit hard done by with the onslaught of mass hysteria, consensual hallucination and nailing of BrewDog to the stake which surrounded Tokyo*. The beer took such a hammering in the media we decided to stage a liquid protest and brewed a 0.5% beer, suitably titled Nanny State.

Tokyo* also had a hard time of it in the USA. The American authorities in their infinite wisdom thought that calling the beer Tokyo* (despite the fact it said ‘Product of Scotland’ on the label’) would ‘confuse American consumers as to the beer’s geographic origin’. So we had to change the name of the beer to Tokio* for the US market. Seriously.

Despite all this, the beer is still going strong and it is a beer we brew all year round. You can find it on tap in our bars, on our online shop and in specialist bottle shops in the UK and all around the world.

Looking back it is easy to forget how different the UK beer market was in 2008. If you launched a 12% beer today nobody would blink. Back then, you could have been forgiven for thinking that we had single handedly caused the downfall of Western civilisation.

You can get your paws on all our drinks here.

Barm 02.12.2012 @ 5:32pm
How awful and upsetting it must have been to have your brand plastered all over the mass media like that.
Fairzo 01.12.2012 @ 9:18pm
Love Tokyo / Tokyo*, have it as my twitter avatar. A stunning creation.
Eigoman 01.12.2012 @ 1:01pm
Tokyo is an exquisite brew that surpasses most fine wines. Congratulations!
Looshkin 30.11.2012 @ 10:58pm
I find it funny that people drink wine by the case but a 12% beer made everyone loose their minds. There is still such a disparity between the way people treat the two products. I love Tokyo* but theres no way you could binge on it, it's just too powerful,
Pete H, Notm 30.11.2012 @ 12:30pm
I can't believe I missed out on the first batch(es) of 12% Tokyo !!!Back in 2008 (and before), I was drinking 12% beer from Belgium and Germany, and there was no fuss at all. Possibly because Belgium and Germany treated their beers as craft products, and not just bland swill to be served ice cold to diguise the lack of flavour.Oh, how things have changed - for the better.
Dubbel 30.11.2012 @ 1:38am
Preferred the first 12% batch. Flavour of the woodchip came through better and not quite so punishingly strong - or expensive!
Chris H 29.11.2012 @ 11:38pm
I must say, I first tried Tokyo* in July 2011... it quickly became my favorite beer. If I could only have 1 beer per day for the rest of my life, it would definately be Tokyo*.
bezibaer 29.11.2012 @ 8:18pm
Its my Xmas beer since 2 Years.
Yuri Katunin 29.11.2012 @ 6:54pm
That was a typical Go Space impression I felt from Tokyo with a living history in my glass. Solaris should be the correct name of the brew.
Hyena27 29.11.2012 @ 6:44pm
This beer is fantastic and love that brew dog is taking the beer industry away from the tasteless mass marketed rubbish that companies such as Anheuser-busch are producing. For the Scottish health ministers to claim that selling a high strength beer is likely to cause or exacerbate alcoholism is ridiculous and distracting from the real issues surrounding alcoholism. Are there not other types of alcohol that have higher alcohol content out there, that are much more accessible and cheaper to alcoholics?? As a lover of craft beers please keep doing what you are doing. Your creativity and ingenuity is much needed in the UK beer industry!
Wedgey 29.11.2012 @ 3:37pm
You guys are the brewing future! You did well sticking with the creativity and genius skills you both have! The futures bright, the futures BrewDog!
jcowie 29.11.2012 @ 3:31pm
Was lucky enough to get my hands on the 1st batch of this stuff. Possibly my fave Brewdog creation. Still incredible to think of the hysteria it created!
Ian G 29.11.2012 @ 3:24pm
Tokyo* remains one of my favourites of your "special" stouts - always order a few whatever else I'm ordering in quantity.
radm4 29.11.2012 @ 3:23pm
That Ch4 interviewer was a bit of a tit to say the least
Ukulele Kris 29.11.2012 @ 3:16pm
Crikey, have I been following you guys for that long now?Seems like only a couple of years!!
Calcam 29.11.2012 @ 3:15pm
Amazing. You fellas are brewing, and marketing geniuses.
Maki 29.11.2012 @ 3:00pm
You shoudl make some Tokyo in Tokyo!Are you guys going to Hop Revolution there this year?
Magnus G 29.11.2012 @ 2:59pm
Ha - I remember how crazy everything went back then.Seems like a very long time ago.Love this beer.